Jake Rademacher  who made the documentary said of it:

“The honest storytelling of “Brothers At War” has received praise from war fighters, veterans, military families, Hollywood celebrities, and now Medal of Honor recipients. Join them by supporting this film which gives a true depiction of our nation’s warriors and their families.”

“The film follows Jake’s exploits as he risks everything—including his life—to tell his brothers’ story.  Often humorous, but sometimes downright lethal, BROTHERS AT WAR is a remarkable journey where Jake embeds with four combat units in Iraq. Unprecedented access to U.S. and Iraqi combat units take him behind the camouflage curtain with secret reconnaissance troops on the Syrian border, into sniper “Hide Sites” in the Sunni Triangle, through raging machine gun battles with the Iraqi Army.”

Fr. Scott tells the story as told by the good Carmelites of the Santa Fe:

“Some parishioners were on their way to celebrate morning mass in honor of St. Patrick on his Feast day.  Juan was working in his garden as usual and, as they passed, they called to him to join them.  “No, no,” he said “I only celebrate the Feast days of Mexican saints.”  So on they went leaving Juan to his gardening.

A couple of days later, on the feast of St. Joseph, they made the pilgrimage again.  They passed Juan’s home but this time, no Juan.  Arriving at the church, who did they behold but Juan devoutly praying before St. Joseph’s statue .  “Juan,” they asked, “what’s this?  You told us that you only honor Mexican saints and St. Joseph is a Jew?”

Juan smiled broadly, “I know, I know, but he’s married to a good Mexican woman….Our Lady of Guadalupe!”

They will never see the light of a birth day.  Yet accomplishment will be theirs. Because God created them, because they exist, because they have mother and father, ancestors and life, because I want eternity as much for them as for myself, I pray God grant them merit and reward.

In the Name of the Father, and of the Son, and of the Holy Spirit, through Whom and for Whom all things were created, I pray the blessings of mercy and forgiveness, redemption and conversion, be bequeathed to the lineage of the Little Ones soon to die; aborted, reduced, researched and materialized. Amen.

In the world to come, may you be thanked for the mercy that flowed in answer to this prayer straight  from the throne of God to your fore-bearers countless in number.  May you be embraced in eternity as you never were in life, save for the Heart of God.

“And because the homicides involved in abortion are ”little murders” – the kind of private, legally protected murders that kill conveniently unseen lives – it’s easy to look the other way.”

“Cardinal Francis George said recently, too many Americans have ”no recognition of the fact that children continue to be killed [by abortion], and we live therefore, in a country drenched in blood. This can’t be something you start playing off pragmatically against other issues.” 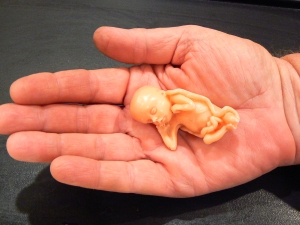 I reached into my pocket and found the small plastic fetus I use to interject reality into the conversation on Life vs. abortion in a time in which we have to show people the cost of abstracted arguments hiding behind “privacy” and “choice”.  Read here what “choice” actually means.

“We need to remember that tolerance is not a Christian virtue, and it’s never an end in itself. In fact, tolerating grave evil within a society is itself a form of evil.” Archbishop Charles Chaput

Here is a photograph I took of a tree struck by lightening. I call it, “Nature cries out!” I see in it a recognizable image.

Can you see it? Let me know what you see. 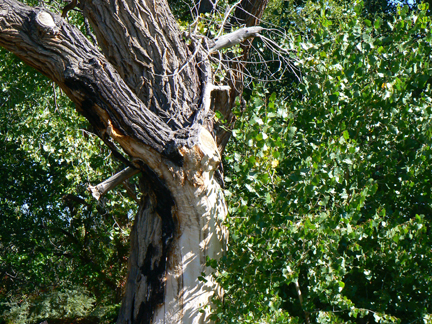 "By His stripes we are healed." "Father forgive them. They know not what they do."

As Presidents’ Day bids us remember our nation’s presidents and the legacy they left to our country, we would do well to pray for President Barack Obama.  The legacy of “Life, Liberty and the Pursuit of Happiness” rests first and foremost on the God-given gift of Life.  No life:  no liberty and no pursuit of happiness!

If President Obama’s promises to Planned Parenthood to sign FOCA  (in whatever form it finally emerges) are realized in law, this president’s legacy will be written in the deaths of countless more unborn Americans.